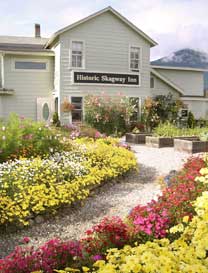 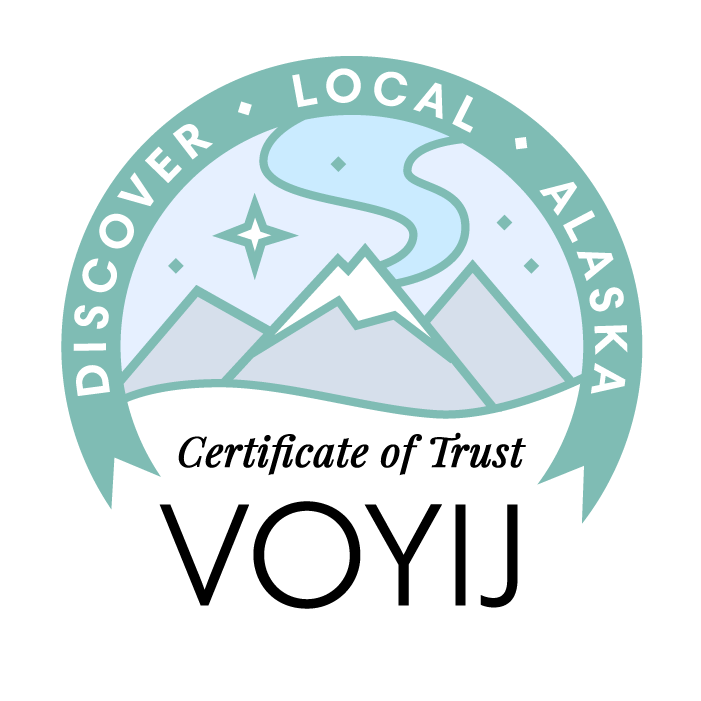 The Historic Skagway Inn Bed & Breakfast began life as the Gutfeld Residence. Built using materials from an 1897-1898 bordello originally located on Second Avenue, Max Gutfeld built the front half of this residence in 1918. The distinctive early craftsman style architecture very popular during the early 1900’s in the lower 48,was unique to Skagway. In the 1920’s the middle section was added by moving the vacant Ross-Higgins warehouse (1901) from 4th Avenue and Main street to the present site. Finally a log cabin structure was attached to the rear of the building, completing the structure as we see it today. This street is the site of Skagway’s once thriving Red Light District. As was true in most frontier towns, prostitution was first a common practice here, then it was regulated, and finally it was outlawed. During the gold rush, rows of cribs (two-room huts where the “soiled doves” plied their trade) occupied the alleys between 4th and 7th. Some cribs were moved again before they were closed, about 1910; others simply closed where they were.

One of the previous owner’s researched the names of the ladies who “worked” on or near the property. The details were later corroborated by Cathy Spude, during the research phase of her novel. Much of this information was most likely provided by George Rapuzzi and later used to name the guest rooms. He certainly would have known men who visited the Red Light District in its hey-day. Click on the individual rooms to learn more about the lady whose name adorns the door. 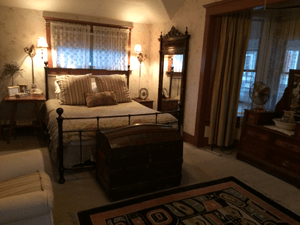 The room Alice is located on the front of the house; consists of one queen bed, a trundle bed and one twin bed on the sun porch. Attached to the room is a private bathroom with sink, toilet and shower. This room sleeps 4, if everyone is friendly you can squeeze in a family of 5. 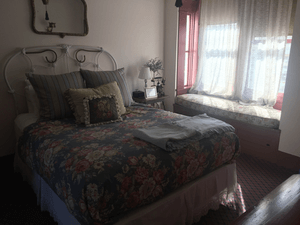 The room Birdie consists of one queen bed and a private closet re-modeled to a powder room (sink and toilet). The shower is located a few short steps down the hall. Robes are provided. The on-hall shower room is shared with guests of Cleo.

Birdie Ash was one of the five women fined during the shut-down of the Alaska Street restricted district in November, 1917. She received the lightest sentence, only $25 and costs compared to Essie Miller’s $200 and costs; the other three madams incurred fines of $100 and costs. That suggests she had a one-woman crib. She had paid her quarterly fines in 1904, and once each in 1907, 1908 and 1909, indicating that she was a part-time worker in Skagway. 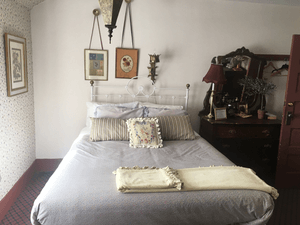 The room Cleo consists of one queen bed and a private closet re-modeled to a powder room (sink and toilet). The shower is located a few short steps down the hall and shared with guests of Birdie. Robes are provided. 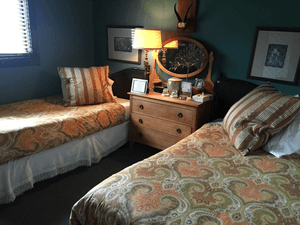 The room Dottie consists of 2 twin beds. Attached to the room is a private bathroom (sink, toilet and shower). This room is ideal for 2 adults that want to sleep in separate beds.

Dot Atwood, the veteran of the group, paid the fine three times in 1903 (once to the U.S. Commissioner) and twice in 1904. As you can see, they were all in and out of town. 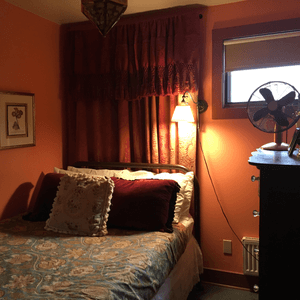 The room Essie, is our smallest room and consists of one double (full) bed and access to on-hallway shared private bathrooms (sink,toilet & shower). Fortunately only 4 guest rooms share the two facilities.

Essie Miller was born to Rebecca and John Miller on May 26, 1880 in Virginia. They named her Augusta, and she had at least one other sibling, a brother named James. She first appeared in Skagway records in 1903, at the age of 23. Essie started out in Skagway as a common prostitute. She probably worked the circuit from Seattle to Dawson, working in other women’s brothel’s or parlor houses at different times of years, depending on where the business was best: Seattle in the winter, Skagway in the spring and fall, and Dawson in the summer. She worked for madam Ida Freidinger, and became one of the older madam’s favorites. Essie was not able to become a “land-lady” or property-owning madam until the restricted district was moved to Alaska Street in 1910. She bought the lot at the southeast corner of Fourth and Alaska Street and built the largest brothel in the district, and moved in a small crib to rent out. When Ida died in 1912, Essie inherited Ida’s three brothels, which she promptly rented out to other madams. With Ida’s death, Essie’s prominence in the restricted district rivaled that of Kitty Faith. When Kitty left in 1916, Essie became the wealthiest and most prominent madam in Skagway.

Tuck Flaharty, a long-time saloon-keeper in Skagway, had moved to Juneau when the Woman’s Christian Temperance Union voted the town dry in June, 1916. Tuck began to smuggle liquor through the restricted district, but that ended in November 1917, when the U.S. Marshal’s office closed down the district. Shortly thereafter, Tuck and Essie married, moved to Seattle, and opened a speak-easy. 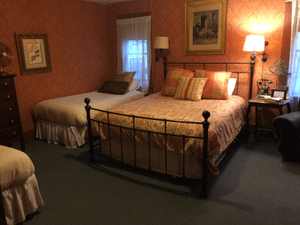 The room Flo consists of one queen bed and two twin beds. The room is located over the center of the building and has a wonderful view of the garden. Attached to the room is a private bathroom ( sink, toilet and shower). This room sleeps 4, if everyone is friendly you can squeeze a family of 5, by placing a mat (made up like a bed) on the floor. 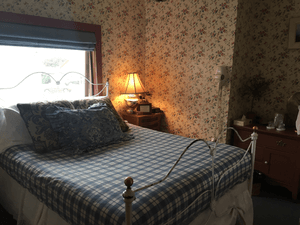 Grace Maloney, aka Grace Magill was not a prostitute in Skagway. She was a land-owner of some of the properties in the Seventh Avenue restricted district, but she never lived in Skagway. She bought up properties from madams as they left town, perhaps giving rise to speculation that she was a madam, but there is no evidence that she ever practiced the trade. She lived in Dawson in 1901 and paid taxes on Skagway Seventh Avenue properties between 1905 and 1916. She married a Dawson miner named Magill. 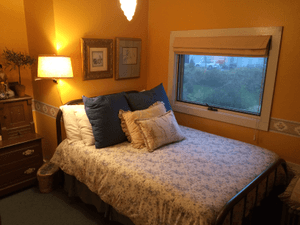 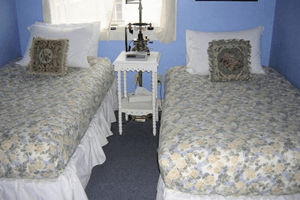 Ida Freidinger was born in Ohio either 1844 or 1849. She had married, and gave birth to six children. All but one had died, an estranged son who lived in Kansas City. Considering her age when she came to Skagway – either mid or late fifties – it is likely that she had established herself as a madam in another place before she had come North. She first appeared in Skagway in September 1902 in a small business just north of the present Skagway Inn. By the following summer, city rules forced her to purchase a strip of land to the north so that she could build an entrance to her parlor house that fronted onto Seventh Avenue. She likely had a small business, employing only one or two women. Among them was Essie Miller, who became a favorite. Ida bought the lot at the southwest corner of Fifth and Alaska when the restricted district was moved in 1910. She had three brothels, occupying one herself and renting out the other two. She died in March, 1912, leaving all of her property to Essie Miller. Her funeral was well attended, and she was celebrated as a pioneer of Skagway. 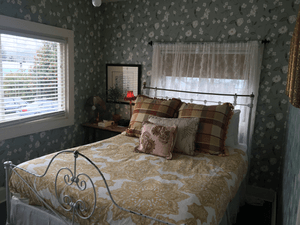 Kitty Faith was born in Van Buren County, Iowa on January 25, 1866 to farmer Josiah Faith and his wife Elizabeth. Born a twin, her real name was either Amaretta or Henrietta. She had at least four brothers and three sisters, including her twin. The family moved to Missouri sometime before 1872, then to Manzonnita, Oregon by 1880. She came to Skagway in January 1898 from Grants Pass, a mining town no more than fifty miles as the crow flies from her family’s farm.

At first she worked for J. D. Stinebaugh, the Principal Barber, who owned a large, two-story “gentleman’s resort” on lot 3, Block 3, the south side of Seventh Avenue between Broadway and State. I believe that Kitty ran this “resort” for Stinebaugh, as he was a respectable businessman and couldn’t operate the business for himself. Furthermore, his wife, Anna, was active in the Women’s Christian Temperance Union, which worked actively to reform the saloons and prostitutes in Skagway. Kitty broke away from Stinebaugh in 1905 and bought lot 12 of Block 4, the southwest corner of Broadway and Seventh. There she opened her own parlor house, which she kept open until the Seventh Avenue district was shut down in September 1909. Kitty was the last madam to leave the district, and, I believe, was the richest woman in Skagway, probably wealthier than Harriet Pullen.

Kitty moved to Ketchikan in the fall of 1909, where she operated a small, two-woman brothel, but by May 1910, had returned. She purchased two lots on Alaska Street between Fourth and Fifth Avenue and opened up six brothels, running one of them herself and renting out the other five. In 1916, she married Chris Wandstead, a Swedish carpenter from San Francisco. They both moved to San Francisco, and Kitty put her brothels on the market. She sold only one of them, a small one-woman crib. The district was closed down by the U.S. Marshal’s office in November, 1917, for smuggling liquor into Skagway.